Here are the poll details. I'm going to summarize it for now however. 61 people contributed to the poll. I will write the answers in brackets. If i write the average, it's out of 5. I'm not going to screenshot the comments though.

NOTE: I will be picking 3 people at random for the prizes. This will occur sometime this weekend. I will announce the winners here as well. 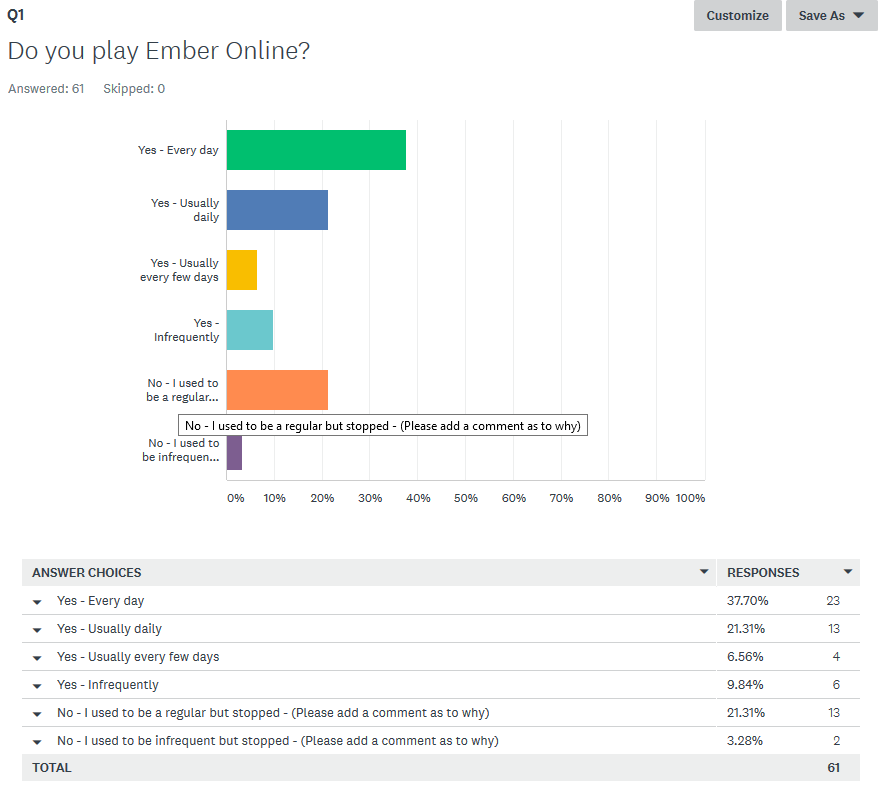 About 70% of you stated you still play (even if somewhat). Alot of replies seem to be issues with toxicity, only two guilds, and some other things. A couple people stated they wanted a RoK 2.0 and they understand it won't be, and it is what it is for some people leaving. Some people also sated that they got to end game too quick with nothing to do, something we are working on very soon too.

Some replies here - not giving names, not so many commented. Most of the positive comments were just how long they played. Some we're that IRL got busy. And then there was alot with 'drama' as a comment, 'guild issues', 'only 2 guilds', etc. I would say half the comments were about guild/drama issues. 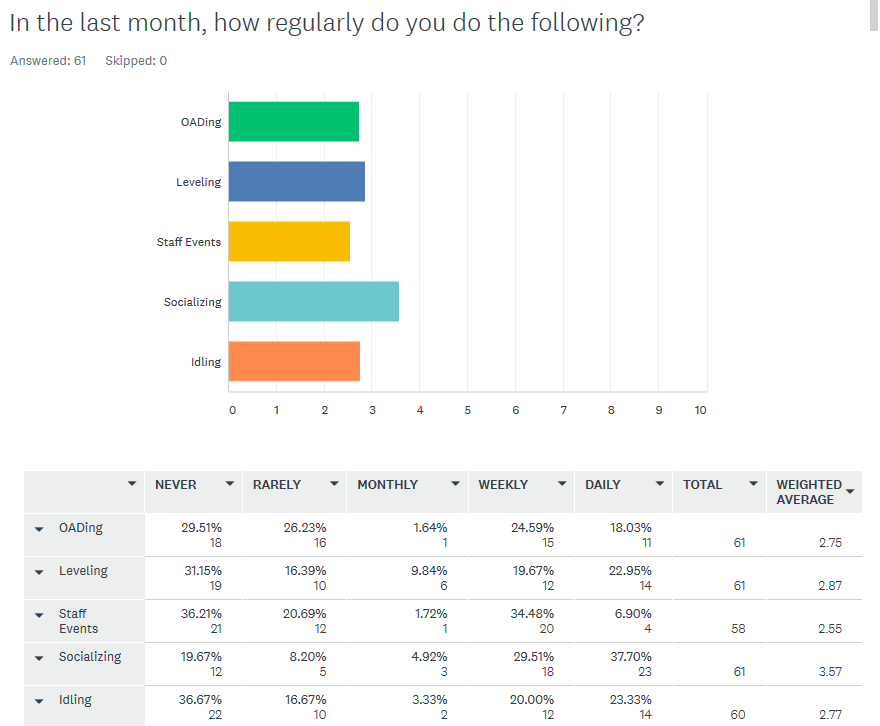 Most of the replies were all equal, bar socializing which was a bit above the rest and staff events that were lower. Again alot of comments crept out about 'Sil or Empire' and some other comments involving wanting more stuff to do. A lot of people commented that they like to socialize with their friends, which is OK too obviously. Playing a game with your friends is a fun thing obviously. The big problem with this question is that a lot of people who said they don't play pretty much marked 'Never' for most of it. Probably should of marked this question as 'when you played' rather than 'in the last month'. Generally though you can see the trends here.

Not much else about this one. It does seem like people obviously want more stuff to do via the comments, which we're working on. 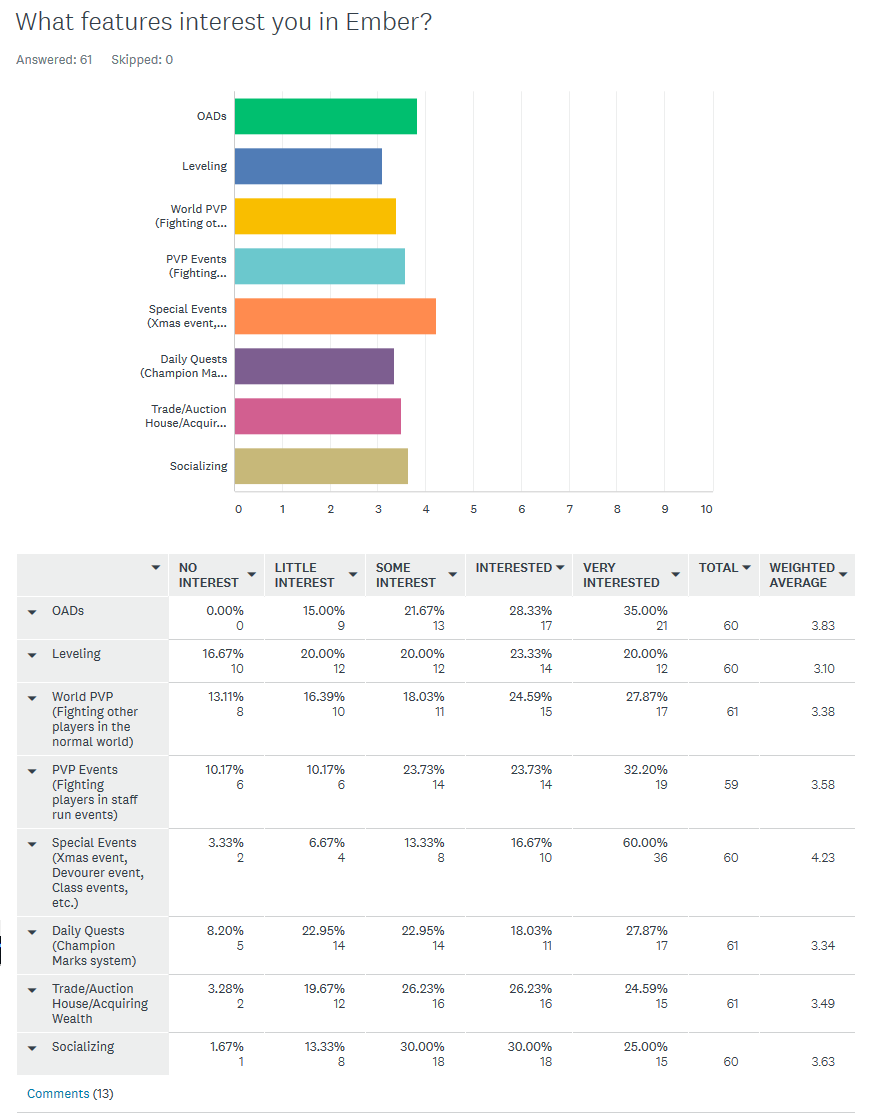 Special events came out on top with a average of 4.23. Next was OADing, PVP events, daily quests, acquiring trade/auction/wealth/social, around 3.60-3.70. The rest was around 3-3.4 average.

The thing however is it's not just the weighted average that comes into play here, it's also what people picked. For example, when it came to OADs, not one person out of 61 picked 'No Interest'. Leveling was a mixed bag, there was a lot of hate or love in this area which means the average dips more. Special events seemed like a popular thing and we'll work on that more too and keep more interest there as we continue.

Not many comments however, many comments there were about events. People want to see more than general events we have going now. I do agree with this too. I would be in favor of bringing back interesting events like WM, class/race events, etc. 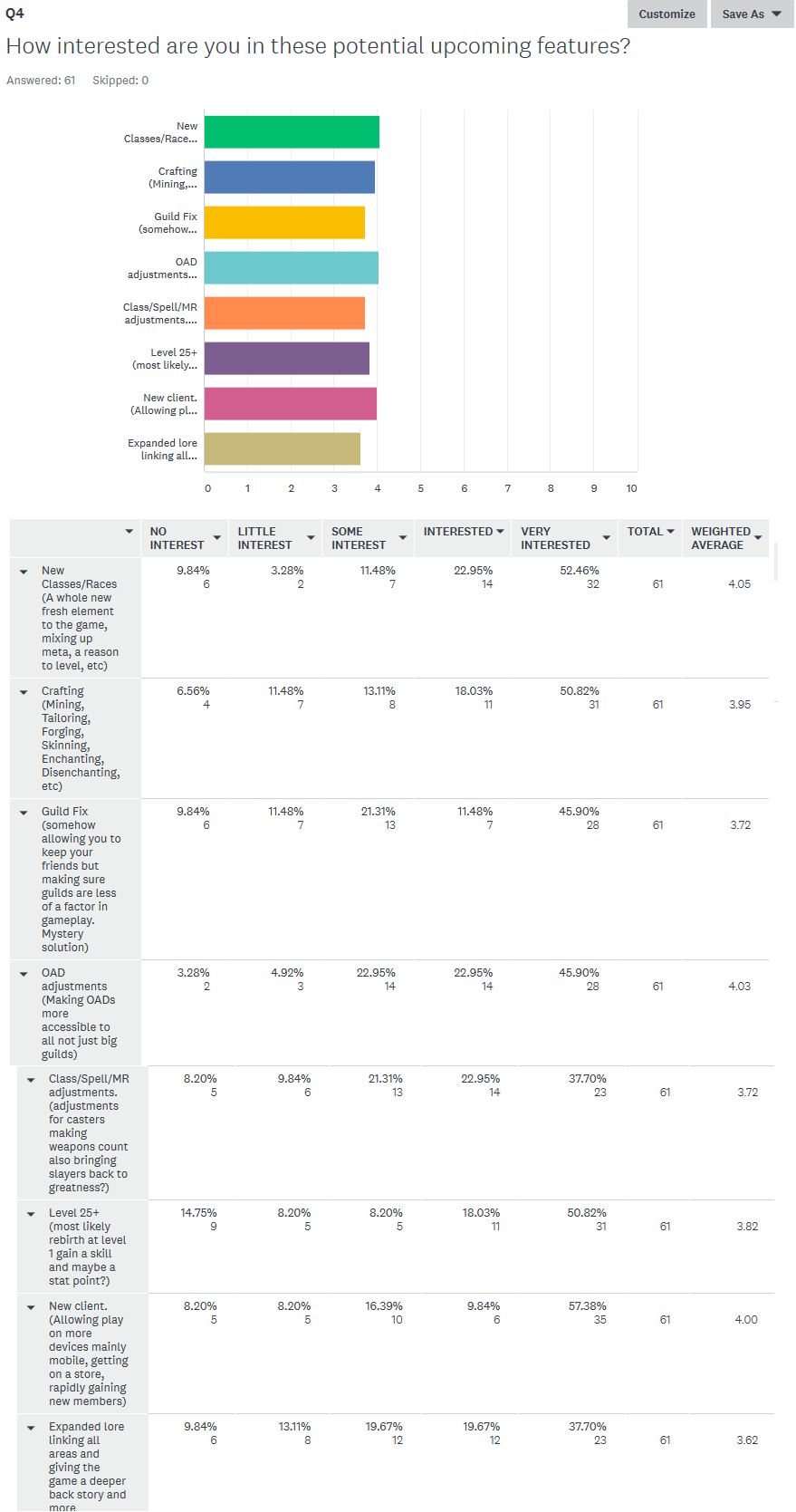 OADs, crafting/etc, new Classes/Races, and a new client are at the forerunner. I believe the new client is up there because it will most likely bring in others and that's how it's perceived. I agree it will, (Lat has a lot of knowledge on this with his other games and knows if you get yourself on app stores/etc you get a lot of download clicks if you make it interesting enough.) I can understand why OADs are up there. I was however surprised about classes/races. I do want to bring in some more classes though, it's something we'll have to see anyways. I will probably work on the newer client once we are more settled with things to do after you're done leveling though. A lot of people seemed to want a tablet client surprisingly or a client they can use on their browsers via the comments. Obviously crafting skills are up there because it's 'stuff to do after level 25' and it's pretty self explanatory.

Next up was level 25+, guild fixes (surprising!), class/race fixes, and then lore. I think for level 25+ people are worried about how it will be done, but if we do add it, we'll make sure it's interesting. It might not even reset your character, as some people were talking about maybe you just unlock more skills/etc as you progress after. I was thinking about branching each class to specifics (I.E. a priest can become a focused healer or a group healer for example.). But nothing is settled there.

I was surprised guild fixes wasn't a little higher. Even though it's at 3.72, I think I rate this higher because of all the comments too. I think people WANT this but are afraid on what this means or what will happen to current guilds. They know it's a problem, but at the same time they don't want certain things to be ruined. I understand why too. A lot of people wanted no guilds or wanted a smaller guilds, but some people actually wanted a 'friends list' too.

We will probably talk about this more as we go. This question was a bigger one and we'll expand on it in the near future. There are a lot of comments for classes/races/things to do but it's too much to write down everything here. 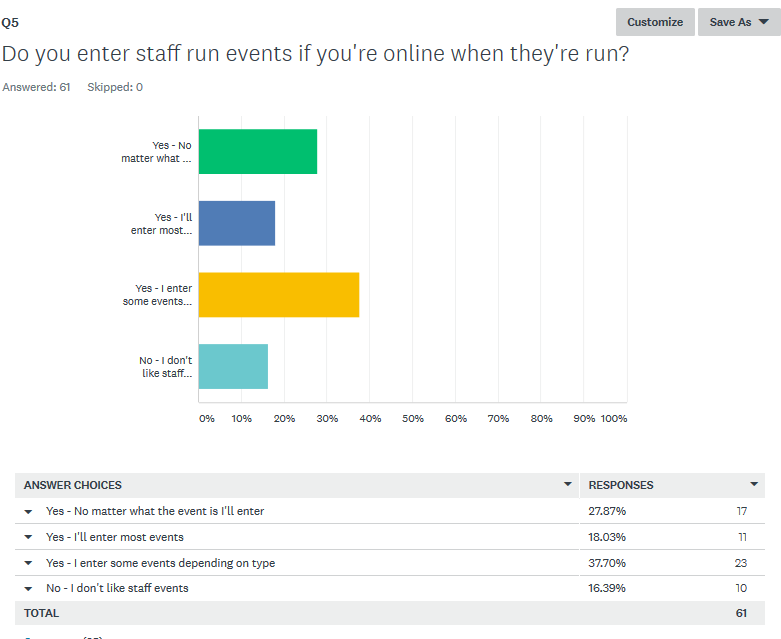 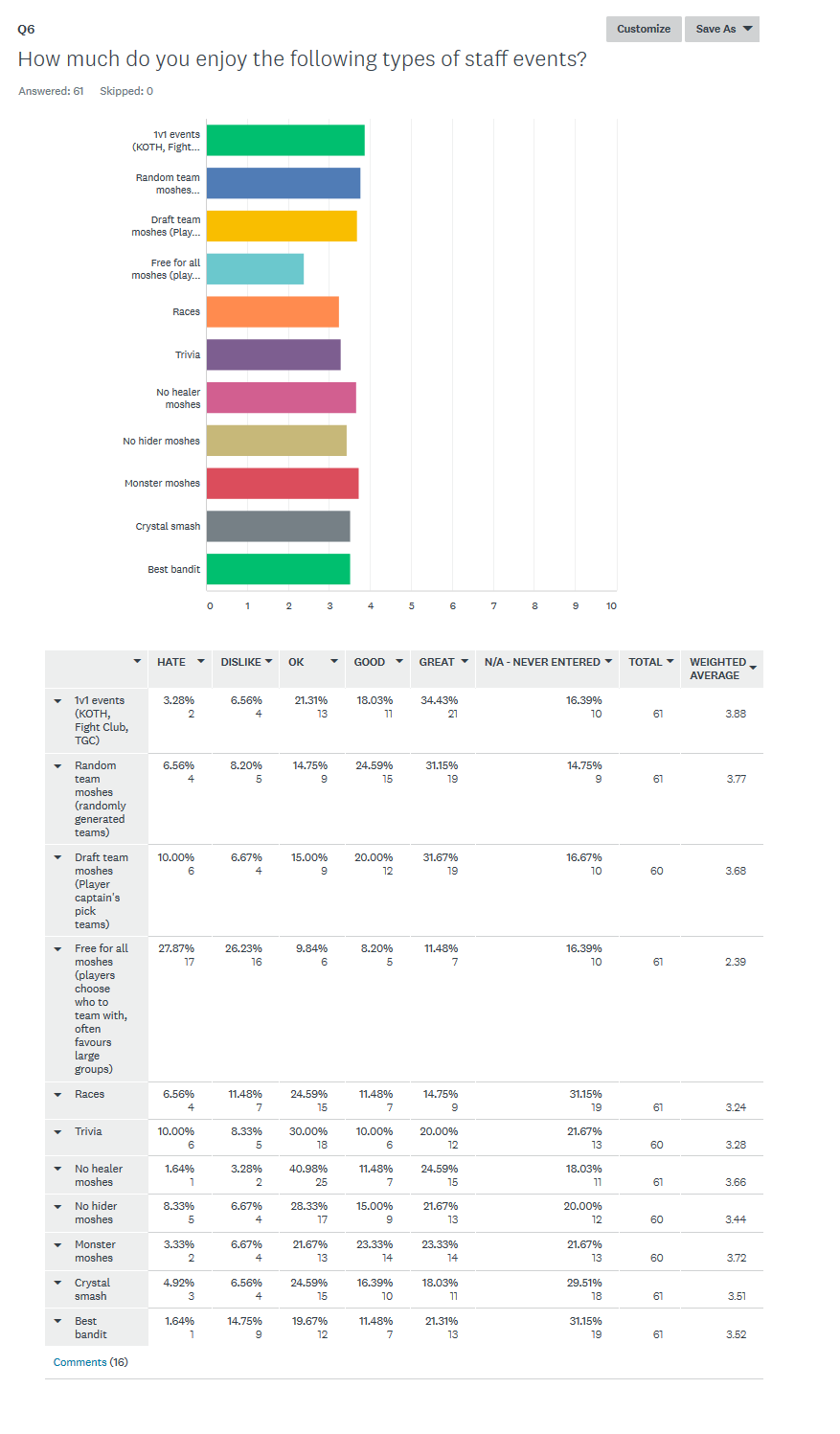 Mixing these two questions. About 81% of you said you like events, which is a good thing. Some people who said NO wanted other events, like PVE type events or such. However a few people commented on crystal smash being 'the best drop stealer' but generally there are ways to fix this. Something we'll have to take a look at. Some people wanted some new events, like a WM type event. Though a lot of people seemed to like 1vs1 type events, they also commented that they would like to see different variations instead of the same one. For example, a TGC style event that only allows 3 classes at a time. FFM moshes seem to be the lowest, which was expected.. Random team moshes was rated pretty high, which was actually unexpected, and pretty interesting! 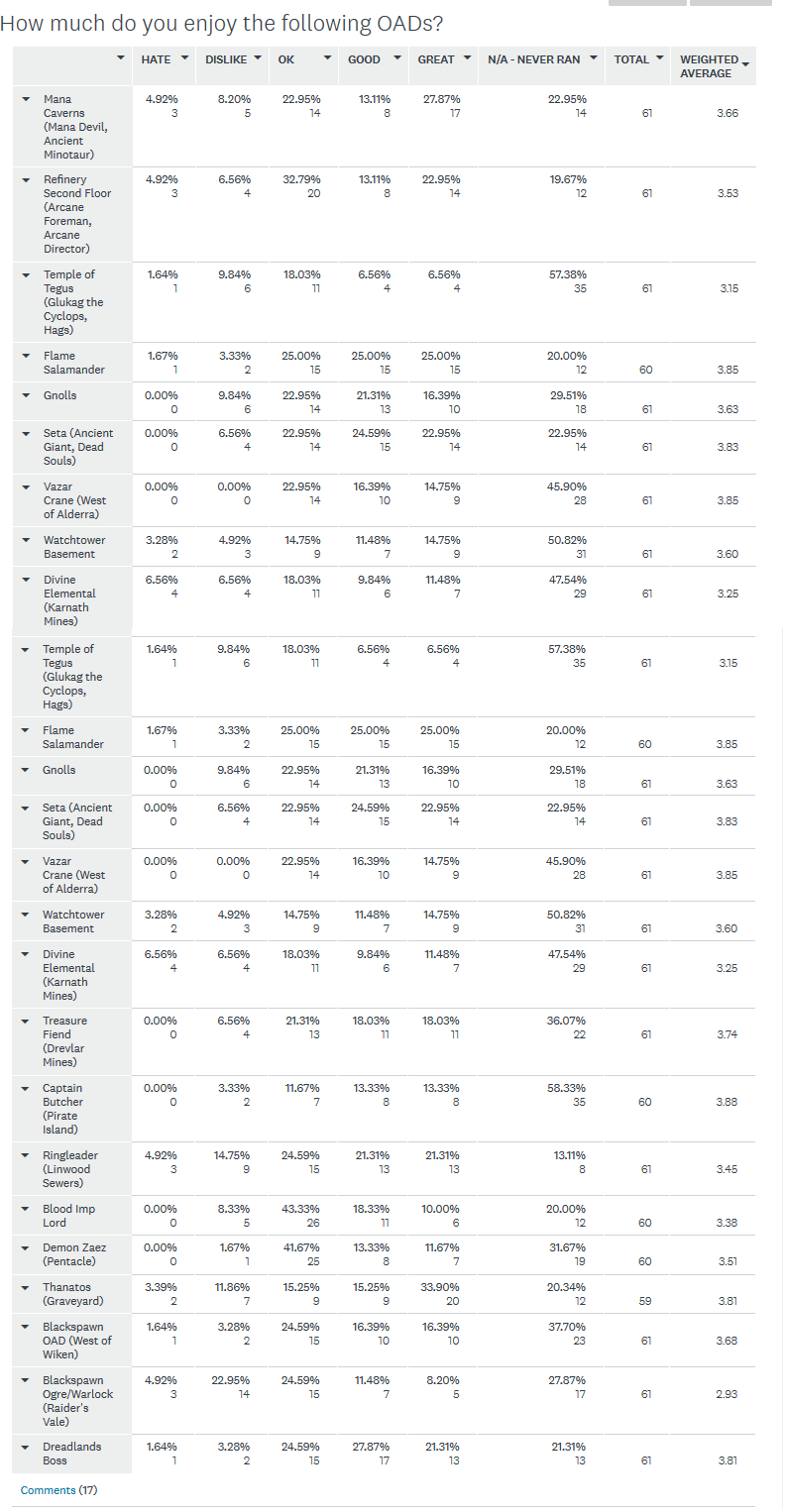 Alot of these seem to be above 3.5 which I would consider 'ok' or better. Anything under this or around it we may look at revamping it and seeing why it's a problem. That's pretty much all I can say towards it. People claim mana cavs should be split up as well (which I've always agreed with). People had issue with certain bosses keys like Ringleader (aka the OAD is okay, the way to get in is bad.) because most of the time the RL wasn't there. This can be addressed via better OAD indicators probably. A few people seemed to want more challanging oads, that require certain skills or types of classes (I.E. Tanks for example) to be important. People seem to want 'scripted bosses' where the norm is changed, which I can understand makes for fun differences too. Hopefully now that we have some scripters we can edit or make some new ones and phase out some OADs that aren't so interesting.

8. 'Have you ever taken a break from Ember, why?'
Half the replies were to do with IRL issues, and the other half had to do with needing more reply value and guild issues (again why I value guild issues much because it's constantly stated by different people.) Pretty much sums that up. People want some 'freshness' to it.

We will be taking this data and working with it as best as we can. I am very thankful for the people who replied to this, even if you don't play anymore it gives us a sense of a direction we should go and what we should work and improve on. I know right now we're a bit on the quiet side, and once we get some things fixed, we'll work on getting people back into the game and with a new client, offering new solutions to play the game which will help. I don't want to do this just yet until some things are improved, otherwise we might just lose any new players that come. Expect this sooner than later though!

Again, I will be picking 3 people at random shortly if you inputted your account name with your survey. It will be announced here. Thank you!
Top

Sorry about the delay!

The winnesr was picked on discord via a random number generator. Entry 5, 16, and 17 were the winners which translated to Fovos, CG, and Bael. They win a Chance Ring.

Thanks everyone for participating!
Top
Post Reply
2 posts • Page 1 of 1

Users browsing this forum: No registered users and 0 guests

Ember Online is a graphical mud based game. Come join in on the fun!